I have been working off and on over the years and have finally created the base of a functions as a service backend for WebAssembly code. I'm code-naming this wasmcloud. Trisiel is a pre-alpha prototype and is currently very much work in progress. However, it's far enough along that I would like to explain what I have been doing for the last few years and what it's all built up to.

Here is a high level view of all of the parts that make up wasmcloud and how they correlate: 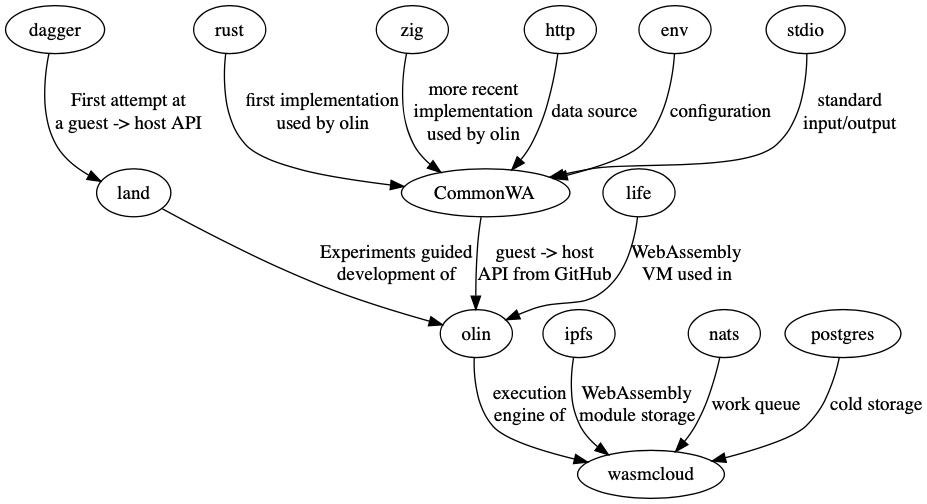 A little bit after I found WebAssembly I started to play with it. It seemed like it was too good to be true. A completely free and open source VM format that would run on almost any platform? Sounds like the kind of black magick witchcraft you hear about on Star Trek.

However, I kept at it and continued experimenting. I eventually came up with Land. This was a very simple thing and was really used to help me invent Dagger.

Dagger was an attempt at an incredible amount of minimalism. I based it on an extreme interpretation of the Unix philosophy (everything is a file -> everything is a bytestream) combined with some Plan 9 for flavor. It had only 5 system calls:

And yet this was enough to implement a HTTP client.

The core guiding idea was that a cloud-native OS API should expose internet resources as easily as it exposes native resources. It should be as easy to use WebSockets as it is to use normal sockets. Additionally, all of the details should be abstracted away from the WebAssembly module. DNS resolution is not its job. TLS configuration is not its job. Its job is to run your code. Everything else should just be provided by the system.

I wrote a blogpost about this work and even did a talk at GoCon Canada about it.

And this worked for several months as I learned WebAssembly and started to experiment with bigger and better things.

Land taught me a lot. I started to quickly run into the limits of Dagger though. I ended up needing calls like non-cryptographic entropy, environment variables, command-line arguments and getting the current time. After doing some research (and trying/failing to implement my own such API based on newlib) I found a library and specification called CommonWA. This claimed to offer a lot of what I was looking for. Namely URLs as filenames and all of the host interop support I could hope for. I named this platform Olin, or the One Language Intelligent Network.

However the specification was somewhat dead. The author of it had largely moved on to more ferrous pastures and I became one of the few users of it. I ended up forking the specification and implementing my view of what it should be.

I ended up implementing a Rust implementation of the guest -> host API for the Webassembly side of things. I forked some of the existing Rust code for this and gradually started adding more and more things. The test harness is the biggest wasm program I've written for a while. Seriously, there's a lot going on there. It tests every single function exposed in the CWA spec as well as all of the schemes I had implemented.

Over time I ended up testing Olin in more and more places and on more and more hardware. As a side effect of all of this being pure go, it was very easy to cross compile for PowerPC, 32 bit arm (including a $9 arm board that lives under my desk) and even other targets that gccgo supports. I even ended up porting part of TempleOS to Olin as a proof of concept, but have more plans in the future for porting other parts of its kernel as a way to help people understand low-level operating system development.

I've even written a few blogposts about Olin:

But, this was great for running stuff interactively and via the command line. It left me wanting more. I wanted to have that mythical functions as a service backend that I've been dreaming of. So, I created Trisiel.

As an interlude, I also created the h programming language during this time as a satirical parody of V. This ended up helping me test a lot of the core functionality that I had built up with Olin. Here's an example of a program in h:

And this compiles to:

This ends up printing:

I think this is the smallest (if not one of the smallest) quine generator in the world. I even got this program running on bare metal: 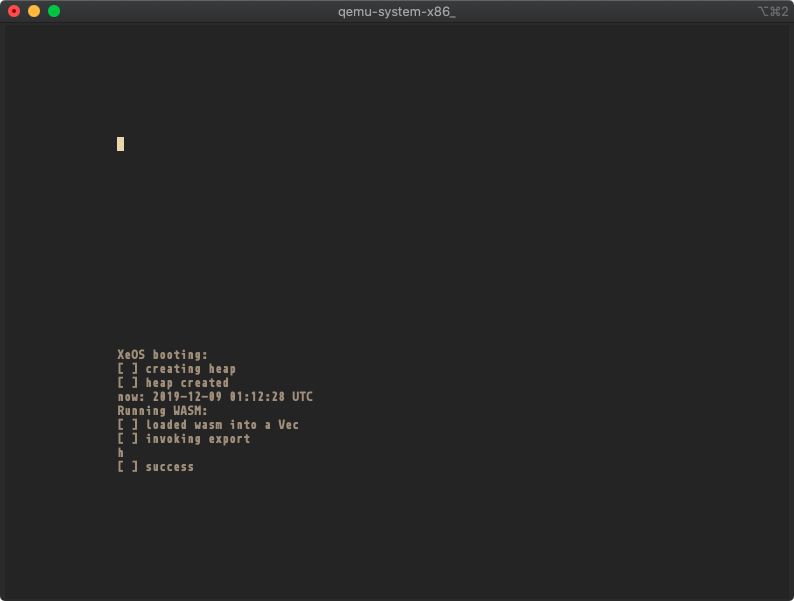 Trisiel is the culmination of all of this work. The goal of wasmcloud is to create a functions as a service backend for running people's code in an isolated server-side environment.

Users can use the wasmcloud command line tool to do everything at the moment:

This tool lets you do a few basic things:

Nearly all of the complexity is abstracted away from users as much as possible.

In the future I hope to do the following things:

Every single one of these people was immeasurably helpful in this research over the years.

And many more I can't remember because it's been so many.

If you want to support my work, please do so via Patreon. It really means a lot to me and helps to keep the dream alive!

This article was posted on M12 08 2019. Facts and circumstances may have changed since publication. Please contact me before jumping to conclusions if something seems wrong or unclear.