Converting a VRChat Avatar to VRM Format for VTubing

So you want to be a VTuber, but you already have a custom avatar that you really like in VRChat. Surely there's a way to make it work, right? This tutorial is going to cover the problem, how I do it and everything I learned along the way.

To say that VR is in its infancy is an understatement. This early on in the game, there are many different ecosystems and each of them really came up with their own avatar format out of necessity. As such, there's a lot of vastly different and incompatible ecosystems for this kind of avatar data. However, a common avatar data interchange format is starting to crop up organically: VRM. This format mostly came from the efforts of Japanese VTubers, and as such most 3d VTubing software supports it.

However, you still have your avatar stuck in VRChat format, thus this article exists.

<Mara> Please note that this REQUIRES you to have access to your avatar data in the Unity editor. Please support VRChat creators, making this kind of content is hard and expensive.

So at a high level, here are the steps for doing this:

First, you need to get your avatar into a "dirty" VRM file. This is going to become the basis of your VTuber model. In order to do this, you need to import the VRM plugins for Unity into your VRChat avatar project.

There are two ways to do this, one of them is to import the Unity packages directly and the other is to customize your Unity package manifest to include the VRM plugins. I'm going to cover both of these below:

With either of these methods, you will need the VRM plugins from GitHub.

The simplest way to get the VRM plugins installed is to use the UnityPackage files that the VRM plugin team releases. Download the UniVRM and VRM packages from the latest release:

And then import them into Unity by going to the "Assets" menu, clicking on the "Import Package" menu and then click on "Custom Package" and select each of the UnityPackage files you downloaded. 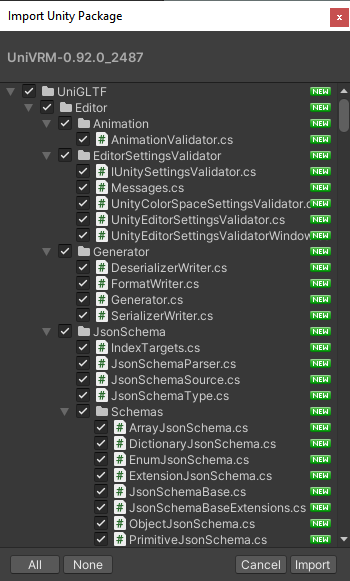 On the release page for UniVRM, there's a JSON fragment labeled manifest.json. This corresponds to a file in your Unity project where you can tell Unity to automatically download and manage packages and updates to them from GitHub and other sources.

In your Unity project folder, open the "Packages" folder and open manifest.json in your favorite text editor (such as emacs). There will be a JSON object that looks like this:

This will be full of other things by default, but you can mostly ignore it because those are things Unity puts in there by itself. Go to the end of the object and add a comma to the end of the last value in dependencies. Then paste in the VRM manifest.json fragment in the release page. You should end up with something like this:

The exact release of the VRM plugin based on when you read this article, but overall it should look something like that.

When you install the Unity VRM plugins, you should have a new "VRM0" menu in your Unity menu bar. Click on it and select "Export UniVRM-0.80.0". 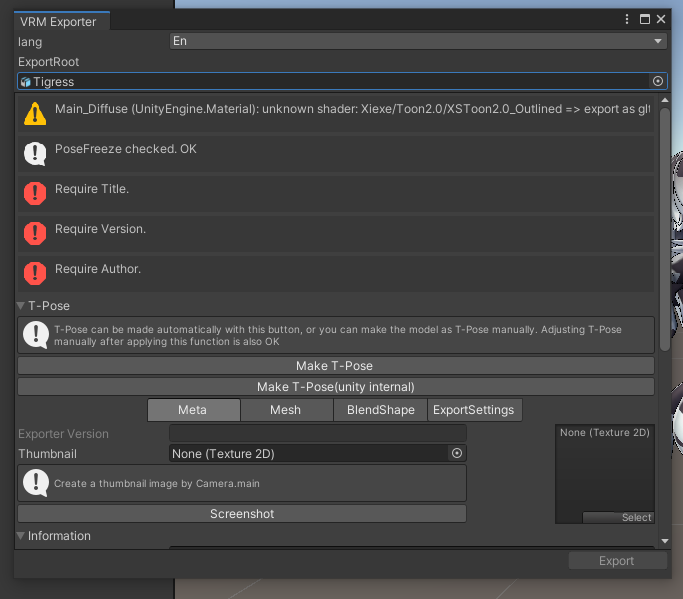 Change the language to "En" (English) so that you can read the error and warning messages. Then fill out the title, version and author information and export your avatar to a VRM file on your desktop folder.

<Mara> Strictly speaking, you don't NEED to use your desktop, however that's where I put intermediate files for things like this.

Strictly speaking, I don't know if you need to do this, but I've found that things are the most reliable when you make a separate Unity project for manipulating your VRM avatar. Open the Unity Hub and create a separate project, then re-import the VRM plugin.

Once you have that ready, import your raw VRM into your new Unity project by clicking on the "VRM0" menu and selecting "Import from VRM 0.x". Select your raw VRM from before and then save it as a prefab in your folder. Unity will lock up for a moment while everything gets crunched and you will have a shiny new prefab in your project.

Drag that prefab into the scene and then click on it to open its inspector. 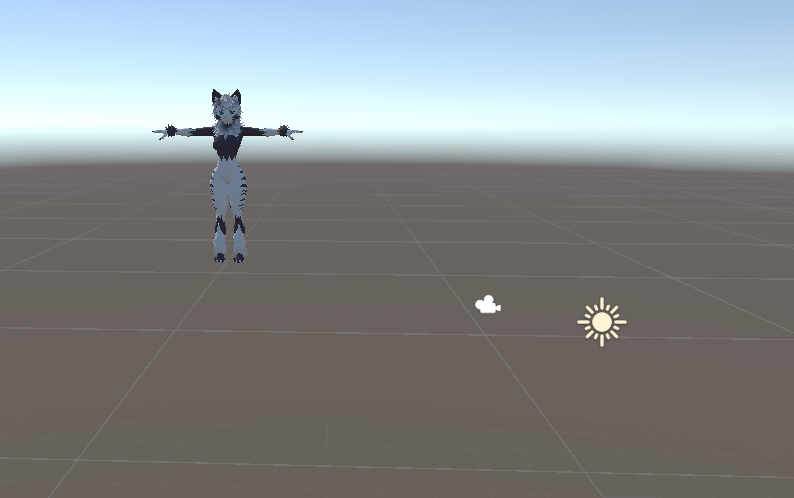 Reset its position to 0,0,0 so that it's in the center of the world. 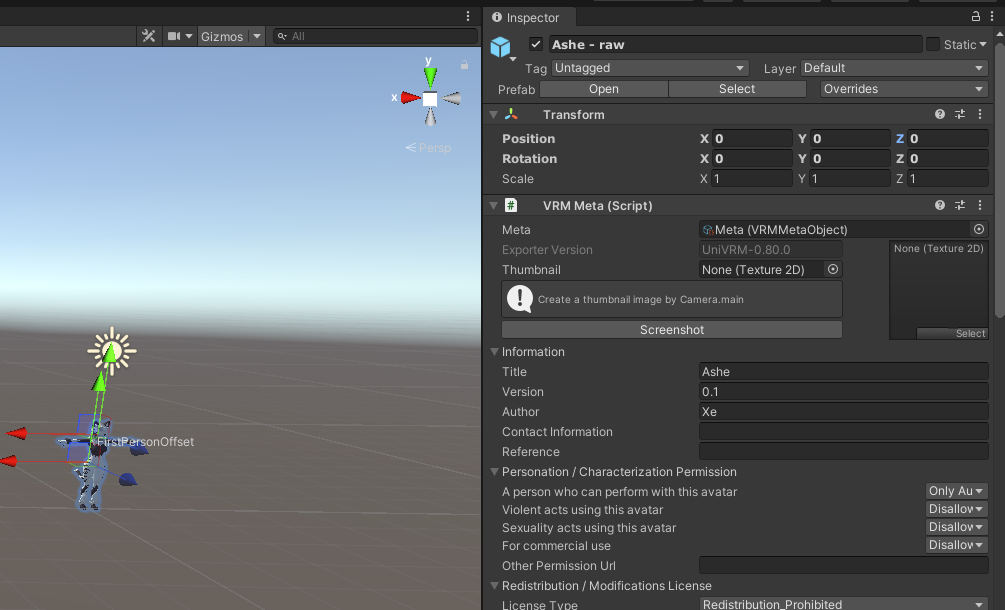 Now you will need to go in and fix all the shaders for your avatar. They should either be the MToon shader or the UniUnlit shader. MToon should be your default choice as it gives you the anime cartoony feeling that you see in a lot of Japanese VTubers on YouTube. This is going to require some trial and error in that annoying "draw the rest of the owl" kind of way.

Now you will have a basic avatar, but if you import it into things like VSeeFace you will notice that the avatar doesn't move its mouth when you speak things. This is because you need to fix the avatar's blendshapes. Blendshapes are the cues that the VRM format uses to know how to manipulate your avatar model's bones in order to make it look like the avatar is speaking.

Unfortunately, the avatar format is limited to having blendshapes for vowel sounds only. In practice, this is not a huge deal (keep in mind this format was originally designed for the Japanese market) but it can mean that you need to enunciate your vowels a bit more to be sure the software picks up what you are saying and adjusts your avatar lips appropriately. There are ways to get better tracking, such as using an iPhone's FaceID sensor for Perfect Sync, but for now vowels only will be good enough.

When you import a VRM, it creates a blendshapes folder in your project folder. Open that folder and you will see a bunch of files that are named after the different VRM animations that you can customize. The big ones are the speech parts A, I, U, E and O. These will form the basis of your VTuber vibe.

Start with A. This correlates to the IPA vowel /a/, which is made by having a fairly open mouth and with your tongue resting on the bottom of your mouth. Open the A blendshape and expand the "Body" dropdown. The slider vrc.v_aa correlates to this sound, so set it to 100. 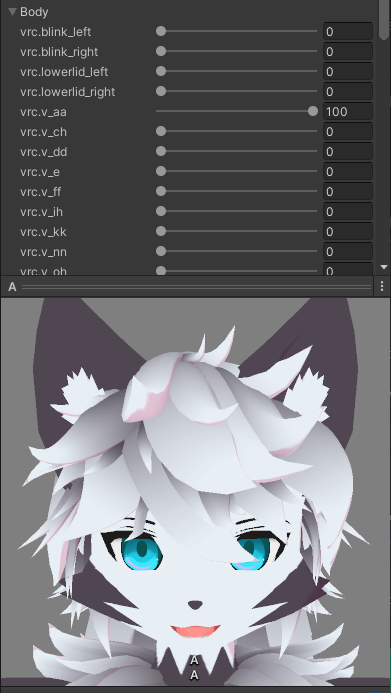 The rest of the vowels should be customized in the same way, here is a small table of what they are called in the blendshapes folder, the IPA for them and the slider that I use:

These should get you an approximation of the vowel sounds, which should be good enough for VTubing starting out.

Another good thing to care about here is blinking. Having your avatar stare endlessly into the eyes of your audience is a great way to make people very uncomfortable and click away. This is not a good way to grow a fanbase around your content.

You can also customize the moods for expressions like being angry, but I'm going to skip this for now. Play around with it and you should be able to get something that looks decent.

Now we should have a semi-decent VRM file. Export it by going to the "VRM0" menu and choosing "Export to VRM 0.x" like you did the last time. Save that to your desktop as a VRM file.

Open your favorite VTubing software such as VSeeFace and import your avatar. Then look into your webcam and say a sentence like this: "Alice shut the door with earnest". Watch the avatar's lips move as you say it. There will be a very slight delay as you say things, but overall it should roughly match up.

If you don't like how things turned out, go in and mess with the sliders. This will take a lot of experimentation to make things look nice. This is normal.

Once you get it to a state where you are happy, save your VRM to several places to make sure it's properly backed up. I'd suggest using DropBox, Google Drive, iCloud Drive or anything else, as long as you have at least three copies. You can recreate your avatar from the Unity project should you need to (or worst case go back through this tutorial from scratch), but I'd suggest avoiding having to do that by having proper backups. Consult the 3-2-1 rule for ideas on how/where to back things up.

Most importantly, have fun in your new life as a VTuber! It's an exciting new frontier out there.

Special thanks to LithiumFox and lesliepone for reviewing this article for content before publishing.

Want to watch these posts get written live? Check me out on twitch.tv! The VOD for this post will be live on Twitch for the next two weeks here and on YouTube permanently here (if you are reading this the day of this post, the YouTube link will not be live).

This article was posted on M01 02 2022. Facts and circumstances may have changed since publication. Please contact me before jumping to conclusions if something seems wrong or unclear.