Recently itch.io had one of the largest game bundles in history and one of the things in it was this humble game named 6E. Some friends and I have started up a small group that meets on the weekends to spend a few hours with an adventure. I've been writing a few adventures for them, and I would like to start sharing their archetypes. These will all be included in a small zine that describes the systems we have built on top of 6E that I'm calling The Source. This PDF will be available publicly once it is closer to done (however if you really want a copy early on to dig at it, let me know and we can surely work something out).

Today, I would like to share the details that went into writing the most recent adventure: The Dwarven Cavern. This was derived from One Page Dungeons by Geoffrey Cullop, specifically this is a variant of Kobold Caverns on page 5. Please note that the experience, gold and hitpoints of enemies are balanced for the group I play with, and will probably need to be adjusted for other parties of adventurers. This should work for players at level 1-3. By the end they should gain enough experience to level up once. My group is also very stun-heavy, so that makes my job of attempting to balance things really interesting.

Like most great adventures, this starts at a humble tavern, The Flying Ombudsman.

The players start off in The Flying Ombudsman, a tavern in the town of LAST_TOWN_YOUR_PLAYERS_WERE_IN. There are a few people sitting at the bar and drinking steamy mugs of grog. There is a salesperson sitting at one of the tables fidgeting with a golden scepter head and looks like she has plenty of items should people want them. There is someone rather sad sitting at another of the tables, looking like he has suffered a great loss.

For extra immersion, have the NPC's speak with a slightly Irish accent. For extra fun, throw in random words from scottish, english and australian accents. Keeps the players thinking.

When players ask the bartender for a mug o' grog, he will sell them one for 5 gold (limit 4 each player). If players ask for the history behind the name, explain to the players the information in The Story of Hol below.

The salesperson at the top sells the following:

You may want to add a few more items to this list. I need to draw up a table for items that salespeople like this can have.

The salesperson can also get you a room at the inn for 30g. It is big enough to hold all of the party.

When players talk to the person at the bottom, they get a sad story about the hoe-pocalypse that threatens the end of the village the person comes from. Dwarves snuck up from underground and stole the hoe from him, making it difficult to feed his hamlet. He asks the adventurers to go to the cavern the dwarves live in and get them back. The players should eventually agree to do it, and the NPC will progressively offer more and more gold as a reward. A charisma check will get him to throw in some salted meat as a reward.

The Story of Hol

The bartender previously ran a failing tavern, and was running out of hope and money. One day, the bartender found a weird looking mug and found that it could be used to talk with the gods. He eventually found a god named Hol. Hol offered him the recipe for the strongest alcohol he could possibly make, for a price. The bartender agreed without further thought and gained the ability to make intensely strong alcohol, but lost his ability to negotiate permanently.

One day the local ombudsman got news of how strong the liquor was and decided to enforce some obscure liquor control law to get the strength reduced. The bartender refused to negotiate and it escalated into a situation where the bartender kicked the ombudsman so hard that he flew into the wall. People started calling the tavern "the place where the ombudsman flew" and that eventually evolved into the name The Flying Ombudsman.

Business has been booming ever since.

The first part has 1 mechanical trap around the second corner, players will need to work their way through it with low light or to grab a working torch off the wall. The trap does 1d4 damage.

The tunnel opens into a guard station, the dwarf archers wait behind cover for players to get in range of their shortbows. If they get within 10 feet of the archers, they fall back to the room behind them to the left. The Archers have 6 hp and grant 100xp on defeat.

The room behind and to the left is a labratory that is very well-lit. Lots of weird liquid in flasks, scientific equipment, etc. There is a Dwarf Grenadier there and will attack you on sight. He throws alchemical grenades at range (1d6 damage, =6 -> random elemental effect), If the players get within melee range of the Grenadier then he will use a poisoned dagger. If the guards retreated then he will use them as meat shields. He has 25 hp. He drops 1d4 alchemical grenades and also drops his poisoned dagger. He grants 300xp on defeat.

The bigger chamber is the dwarven living area. Plenty of beds to hide behind, but there are 1d6 dwarves living in there. They attack on sight, but flee south if their attack goes poorly. The dwarves each grant 100xp on defeat. There is a chest in there that is actually a mimic. It drops an Amulet of Chest on defeat.

The room south is the home of Bubba the Bugbear, a hired goon of the dwarves. Bubba and the remaining dwarves make their last stand here. Bubba grants 500xp on defeat and has 30hp and 1d6+2 attack damage with his giant club.

The final room is the treasure room, which contains the stolen hoe, some other farming equipment and 250 gold. After this the dungeon is cleared and players gain experience from their journey, then go back to The Flying Ombudsman victorious. The quest NPC will award them with however many gold they agreed to and any items they also agreed to.

Keep-away. Will flee at the first sign of trouble.

Insane. Will do things that normal enemies would not.

Poisoned Dagger. Melee Attack: 1d4 damage. On hit player must roll for constitution. If the check fails they get disadvantage for their throws the next 1d3 turns.

Short and Stout. Easily able to hit enemies below the belt.

Unsuspicious. Come on, the chest wouldn't be alive, would it?

Omnomnom Melee Attack: 1d6 piercing damage, gets advantage if the player tries to open the chest.

From Bubba with Love

Unreasonable. Does not respond well to trickery.

These are the unique items specific to this quest.

A wooden/iron mug full of the barkeep's grog. Consuming it gives you the following stat boosts for 3 turns:

This bonus does not stack. When you drink the grog, you keep the mug and can use it to bludgeon people for normal attack damage. It can also be used as a tool to check for traps.

Does not sell, purchasable for 5g.

A golden scepter head that looks like The Grand Nagus from Star Trek. It has no effect outside of when it's put on a staff. When it is on a staff it gives you 25% more gold when you collect gold from places. This has 5 charges and cannot be refreshed.

Standard grenades that look like they are made out of wood, metal, insanity and magic. They do d6 damage normally, but when you crit with one it also causes one of the following status effects (roll a d4):

Sells for 25g each, unpurchaseable.

A standard dagger that gives no distinct bonuses. However when you use it as a normal dagger, you need to roll for constitution in addition to rolling for strength. If you fail the constitution check (but pass the strength check), you get poisoned from the poison streaking out of the dagger.

The poison has 5 charges.

Merchants do not want to take the risk buying it and will have you pay them for its disposal. This cannot be purchased.

A rather large mace that does +2 damage. It is a giant thing designed for a 9-foot tall centaur. It takes up three slots in your inventory. It looks imposing and may require a lot of strength to use properly.

This cursed amulet lets the holder transform into a harmless looking treasure chest, but also grants them advantage if an enemy tries to open it. After 4 transformations, they need to roll a charisma check when they try to turn back. If that fails, they stay a chest for an hour (with arms/legs/a mouth/etc). After 4 more transformations, they turn into a mimic permanently. The transformation count stays persistent until someone becomes a mimic, then it resets to zero.

Merchants will pay 100 gold for it, but will only accept it after the player rolls for charisma. 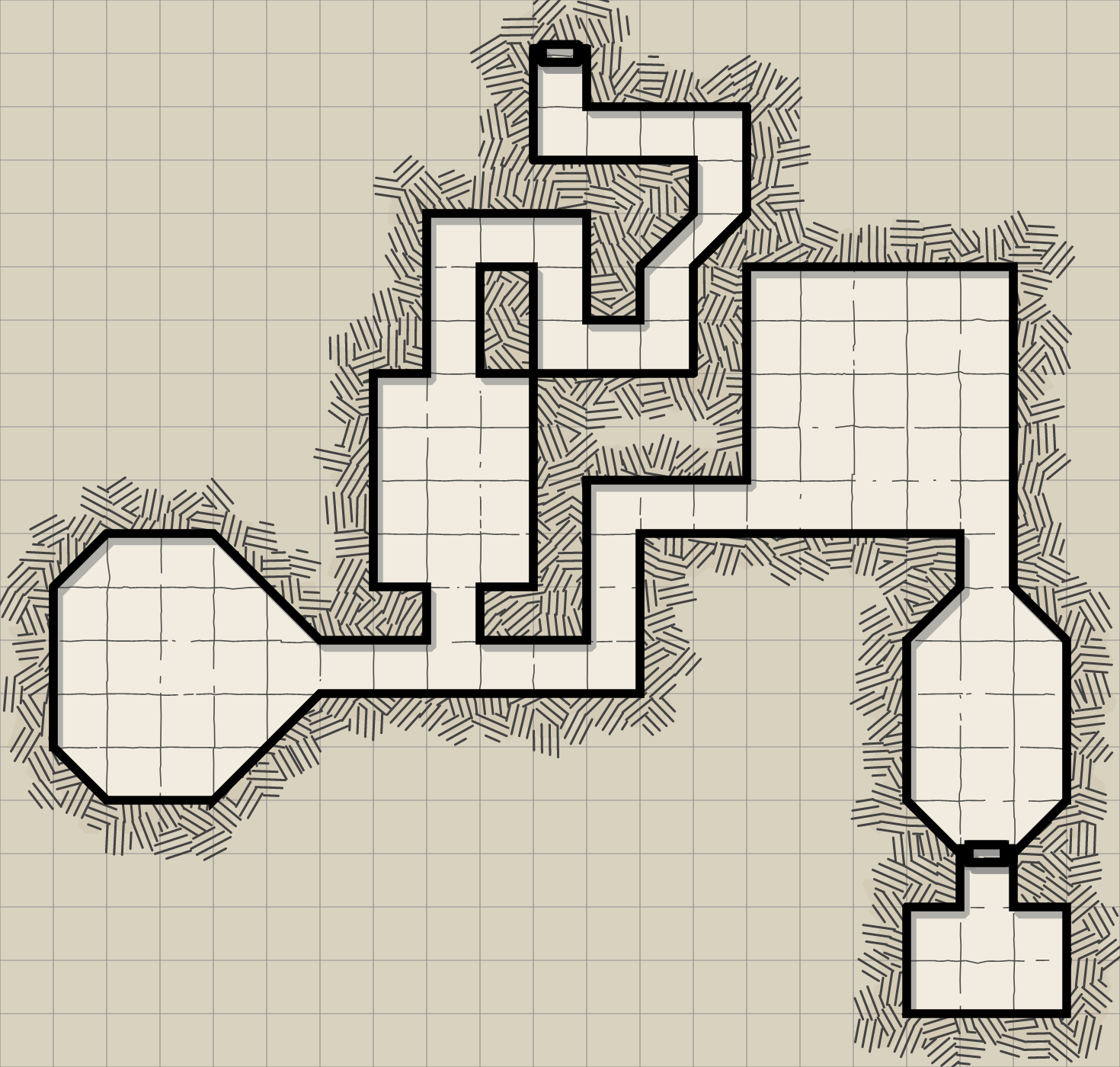 When I ran this yesterday, the following amazing things happened:

I still wonder how they are going to use that Cursed Amulet of Chest though.

Thank you @infinite_mao for making 6E. I can only hope that my buying your stuff separately and making this content for 6E can help give back to the community.

Feedback on the balance of this is very welcome. I openly welcome any and all feedback about how this quest could be rebalanced to be a bit less lopsided in favor of the players. I also wanted to err on the side of balancing towards the players to avoid an unwanted party death.

This article was posted on M06 28 2020. Facts and circumstances may have changed since publication. Please contact me before jumping to conclusions if something seems wrong or unclear.