The last post covered a lot of the basic usage of TempleOS. This post is going to be significantly different, as I'm going to be porting part of the TempleOS kernel to WebAssembly as a live demo.

This post may contain words used in ways and places that look blasphemous at first glance. No blasphemy is intended, though it is an unfortunate requirement for covering this part of TempleOS' kernel. It's worth noting that Terry Davis legitimately believed that TempleOS is a temple of the Lord Yahweh:

As such, a lot of the "weird" naming conventions with core parts of this and other subsystems make a lot more sense when grounded in American conservative-leaning Evangelistic Christian tradition. Evangelical Christians are, in my subjective experience, more comfortable or okay with the idea of direct conversation with God. To other denominations of Christianity, this is enough to get you sent to a mental institution. I am not focusing on the philosophical aspects of this, more on the result that exists in code.

Normally, people with Christian/Evangelical views see God as a trinity. This trinity is usually said to be made up of the following equally infinite parts:

In TempleOS however, there are 4 of these parts:

god is really simple at its heart; however this is one of the sad cases where the actual documentation is incredibly useless (warning: incoherent link). god's really just a FIFO of entropy bits. Here is the [snipped] definition of god's datatype:

This is about equivalent to the following Zig code (I would just be embedding TempleOS directly in a webpage but I can't figure out how to do that yet, please help if you can):

Most of the fields in our snipped CGodGlbls are related to internals of TempleOS (specifically it uses a glob-mask to match filenames because of the transparent compression that RedSea offers), so we can ignore these in the Zig port. What's curious though is the words list of strings. This actually points to every word in the King James Bible. The original intent of this code was to have the computer assist in divination. The above kind of ranting link to templeos.holyc.xyz tries to explain this:

Terry Davis legitimately believed that this code was being directly influenced by the Holy Spirit; and that therefore Terry could ask God questions and get responses by hammering F7. One of the sources of entropy for the random number generator is keyboard input, so in a way Terry was the voice of god through everything he wrote.

Terry: Is the World perfectly just?
god: Are you calling me lazy?

Once the system boots, god gets initialized with the contents of every word in the King James Bible. It loads the words something like this:

Since the vocabulary list is pretty safely not going to change at this point, we can omit the first step:

Now that all of the words are loaded, let's look more closely at how things are added to and removed from the stack/FIFO. Usage is intended to be simple. When you try to grab bytes from god and there aren't any, it prompts: 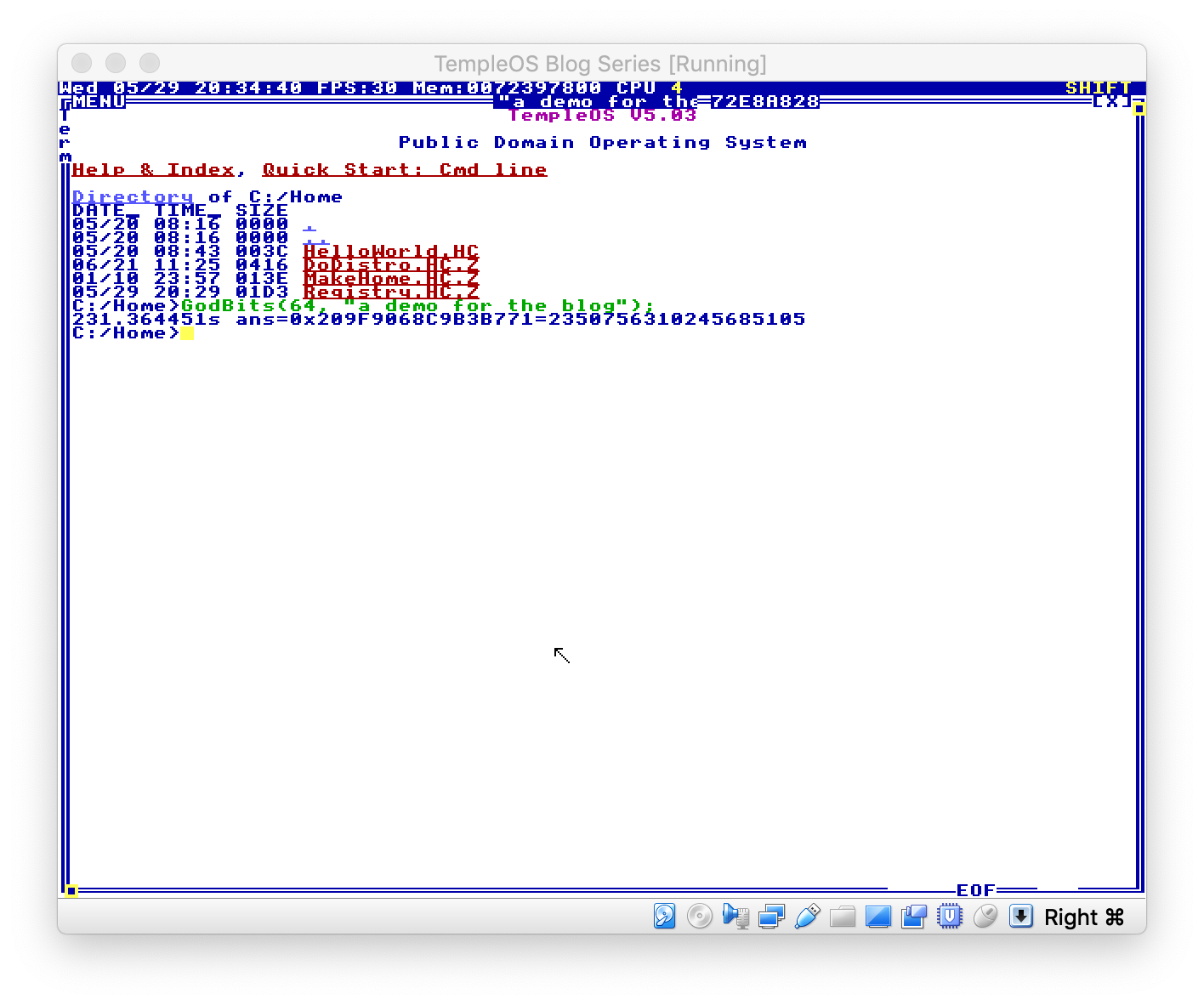 This is actually also a generic userspace function that applications can call. Here's an example of god drawing tarot cards.

So let's translate this to Zig:

We don't have the best sources of entropy for WebAssembly code, so let's use Olin's random_i32 function:

And when we run this manually with cwa:

Yikes! Loading the wordlist is expensive (alternatively: my arbitrary gas limit is set way too low), so it's a good thing it's only done once and at boot. Still, regardless of this TempleOS boots in only a few seconds anyways.

The final product is runnable via this link. Please note that this is not currently supported on big-endian CPU's in browsers because Mozilla and Google have totally dropped the ball in this court, and trying to load that link will probably crash your browser.

Hit Run in order to run the final code. You should get output that looks something like this after pressing it a few times: 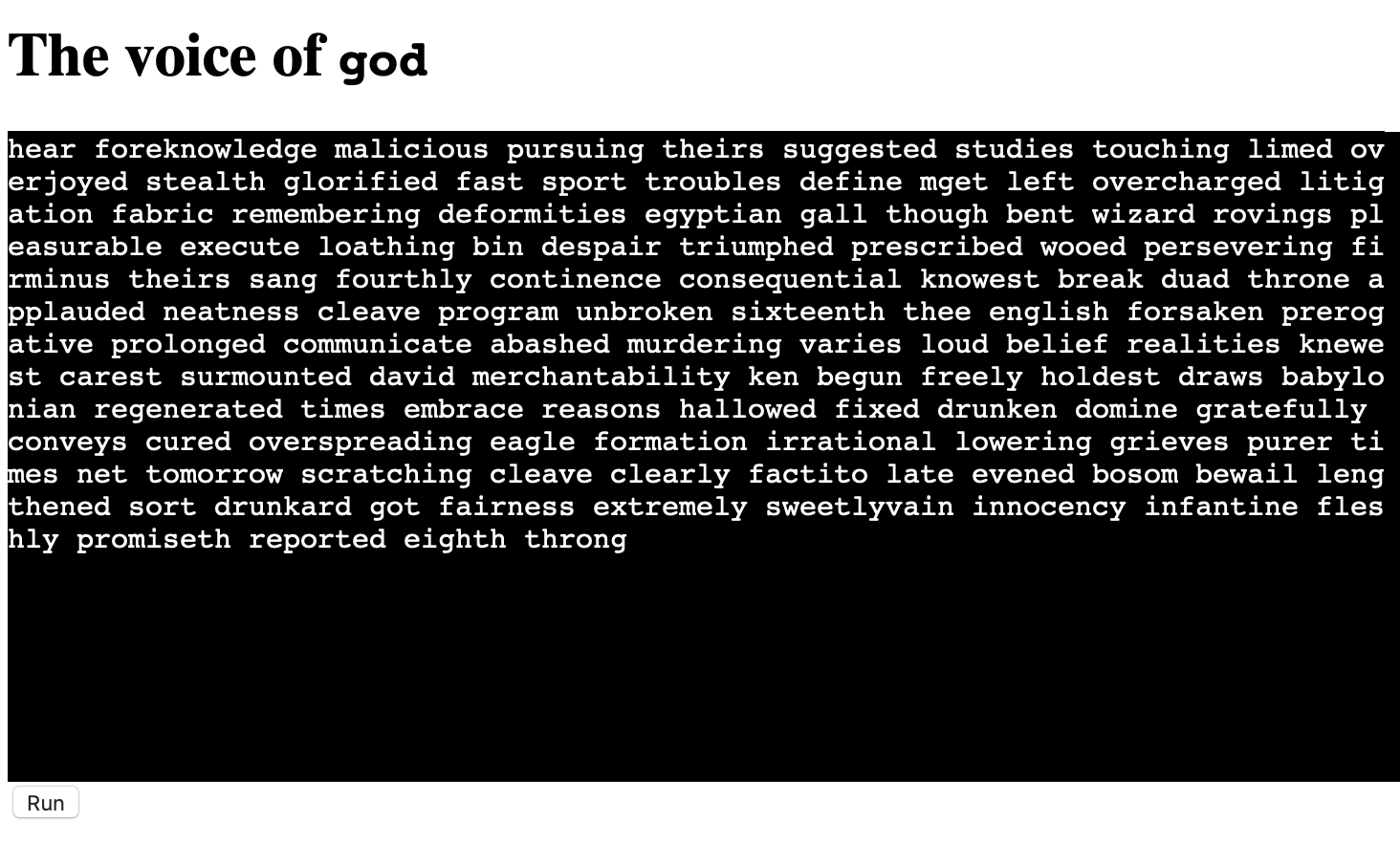 Special thanks to the following people whose code, expertise and the like helped make this happen:

This article was posted on M05 30 2019. Facts and circumstances may have changed since publication Please contact me before jumping to conclusions if something seems wrong or unclear.