Recently I've started to work the Pomodoro technique into my workflow. I've been trying to use it on and off for years, but it's never really stuck until now.

My work laptop uses KDE, so I tried out Fokus as a pomodoro timer on a lark. I've really liked this. I think one of the major differences between how I've been failing at pomodoro in the past and why it's been working now is that I've worked it into my daily note-taking/TODO workflow. I label each pomodoro (my notes call them "Pom" because that isn't something I write often in them) as a section in my notes and then include a few TODO items under it. I'll also add some notes to the pom in case I need them later.

Here is an example of one such pomodoro section: 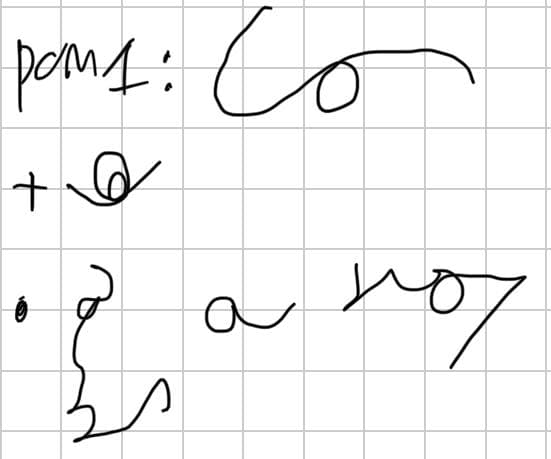 <Numa> What the heck are those scribbles? Those look like sick noodles!
<Cadey> I've been taking notes in Gregg Shorthand for almost 6 months now. I do that mostly to have a way to write things in my notes in such a way that onlookers can't easily see what is going on in them. It is similar to using something like Elian Script or Ford Improved Shorthand for taking notes, but the main difference is that Gregg is phonetic, so things will end up translating out like this:
<Cadey> Even though things literally say something like this:
<Cadey> Semantically, it has the same meaning as the first segment.

<Mara> If you are new to the industry, this kind of admission that less than half of someone's workday is spent doing directly productive work can sound really weird, but this is actually on the higher end of the spectrum from what we've been able to research.

The other major important part of the pomodoro technique is frequent breaks after every focus session. During the shorter breaks I'll play a short song in Beat Saber as a way to reset focus and create a new flow state to lead me into the next focus session. Usually it also helps to work on something else in the next focus session to force myself into a different mode of thinking, but sometimes I only really have one major outstanding task at once.

I have been getting a lot better at estimating how long something will take for me to do as a result of this (is this one of those neurotypical things that I've not gotten the manual on and thus have had to relearn totally from scratch?), but I do not feel comfortable sharing my estimates with anyone else yet.

I am definitly going to continue with this experiment. I haven't found a suitable pomodoro timer for Gnome yet, though I haven't looked too much. I've been trying to reserve pomodoro for my dayjob, but I may integrate it into streams as integrated breaks to talk about something else for a moment.

Overall though, I've been liking this technique. It makes me feel like I have gotten things done even when my workday doesn't end up with any completed pull requests or something like that. I can look back at the note for the day and say "yeah, I did things".

If you are looking for some pomodoro software, here's a little table of things that I've been liking:

This article was posted on M02 19 2022. Facts and circumstances may have changed since publication. Please contact me before jumping to conclusions if something seems wrong or unclear.