maybedoer: the Maybe Monoid for Go

I recently posted (a variant of) this image of some Go source code to Twitter and it spawned some interesting conversations about what it does, how it works and why it needs to exist in the first place: 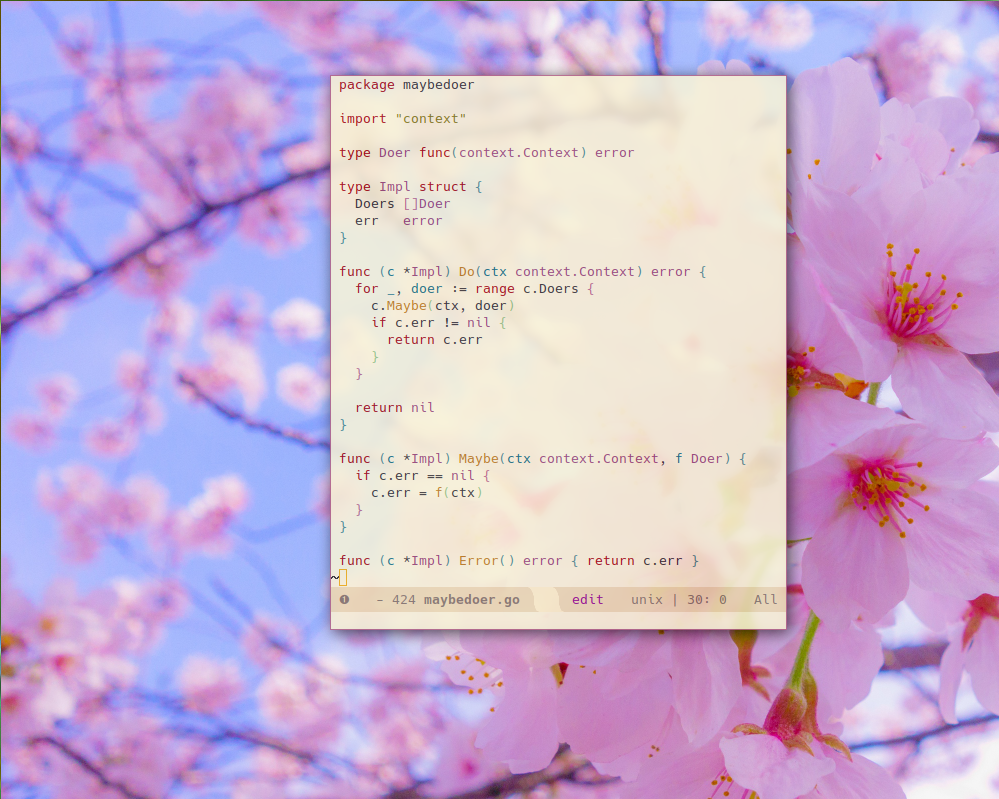 This file is used to sequence functions that could fail together, allowing you to avoid doing an if err != nil check on every single fallible function call. There are two major usage patterns for it.

The first one is the imperative pattern, where you call it like this:

The second one is the iterative pattern, where you call it like this:

Both of these ways allow you to sequence fallible actions without having to write if err != nil after each of them, making this easily scale out to arbitrary numbers of steps. The design of this is inspired by a package used at a previous job where we used it to handle a lot of fiddly fallible actions that need to happen one after the other.

However, this version differs because of the Doers element of maybedoer.Impl. This allows you to specify an entire process of steps as long as those steps don't return any values. This is very similar to how Haskell's Data.Monoid.First type works, except in Go this is locked to the error type (due to the language not letting you describe things as precisely as you would need to get an analog to Data.Monoid.First). This is also similar to Rust's and_then combinator.

If we could return values from these functions, this would make maybedoer closer to being a monad in the Haskell sense. However we can't so we are locked to one specific instance of a monoid. I would love to use this for a pointer (or pointer-like) reference to any particular bit of data, but interface{} doesn't allow this because interface{} matches literally everything:

This could mean that if we changed the type of a Doer to be:

Then it would be difficult to know how to handle returns from the function. Arguably we could write some mechanism to check if it is an error:

But then it would be difficult to know how to pipe the result into the next function, unless we change Doer's type to be:

But this kind of repetition would be required for every function. I don't really know what the best way to solve this in a generic way would be, but I'm fairly sure that these fundamental limitations in Go prevent this package from being genericized to handle function outputs and inputs beyond what you can do with currying (and maybe clever pointer usage).

I would love to be proven wrong though. If anyone can take this source code under the MIT license and prove me wrong, I will stand corrected and update this blogpost with the solution.

This kind of thing is more easy to solve in Rust with its Result type; and arguably this entire problem solved in the Go package is irrelevant in Rust because this solution is in the standard library of Rust.

This article was posted on M05 23 2020. Facts and circumstances may have changed since publication Please contact me before jumping to conclusions if something seems wrong or unclear.