How to Set Up WeeChat on NixOS

Internet Relay Chat (IRC) is the king of chats. It is the grandfather of nearly every chat protocol and program you use today. It has been a foundation of the internet for over 30 years and is likely to outlive most of the chat apps you use today. IRC is used heavily by the people that make the software that you use daily, and has been catalytic to careers the world over.

However, because of its age IRC can be a bit hard for newcomers to get into. It has its own cultural norms that will seem alien. In this article we're going to show you how to set up an IRC client and a persistent bouncer (something that stays connected for you) with a web UI on NixOS. For the sake of simplicity we well be connecting to Libera Chat.

IRC is an open protocol and it has been one for many years. As such there are many clients to pick from. However, you're reading an article on my blog and that means I get to let my opinions about IRC clients influence you. So, here's how to set up WeeChat (not to be confused with WeChat, the chat program mainly used in China), my IRC client of choice.

<Mara> Even though this article is focusing on NixOS, WeeChat has been around for many years and is likely to be present in your distribution of choice's package manager.

You can install WeeChat by adding it to your configuration.nix like this:

Then you can rebuild your configuration with the normal nixos-rebuild command:

And WeeChat should be visible in your $PATH:

And you should see the default UI: 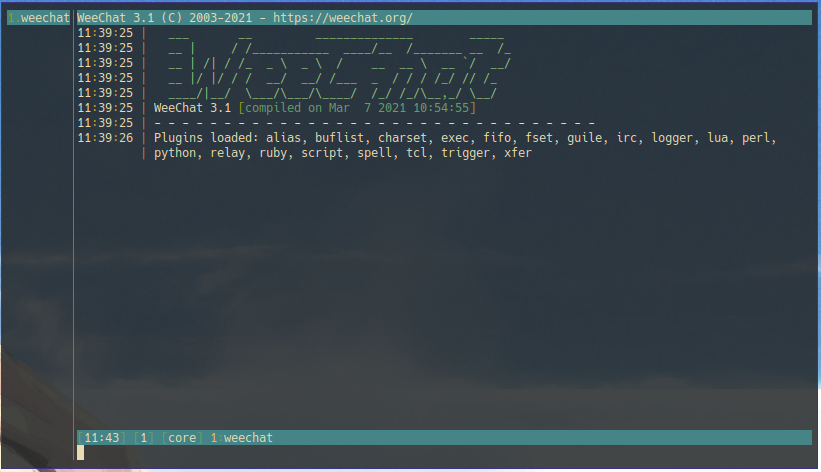 First let's change how WeeChat groups server buffers. Normally it lumps everything into one big merged buffer, however most other clients will have independent buffers per network. I like the behaviour where each server has its own buffer. To make the server buffers independent, paste this line into the input bar:

WeeChat has a very primitive colorscheme system through various settings. For most people the defaults will be fine. However certain color schemes (like the one I use, Gruvbox Dark) can make the top titlebar hard to read. WeeChat's website has a themes page where you can get some ideas.

<Mara> The files that the themes page offers are intended for a WeeChat script that hasn't been included in the normal script repository for some reason, however you can obviate that need by a little massaging with vim!

You can convert a theme to a bunch of /set commands with vim. Find a theme you like such as nils_2 and copy the theme to a file. The theme script outputs something that looks like WeeChat configuration by default.

<Cadey> If you want the theme I use, download it from here.

Then open that file in vim and we will munge it in a few steps.

First, put /set at the beginning of every line:

Then remove the = from each line:

And finally remove all of the quotation marks (make sure to include the global flag here because otherwise only one of the quote marks will be removed):

And then paste it all into your input line and then run /save: 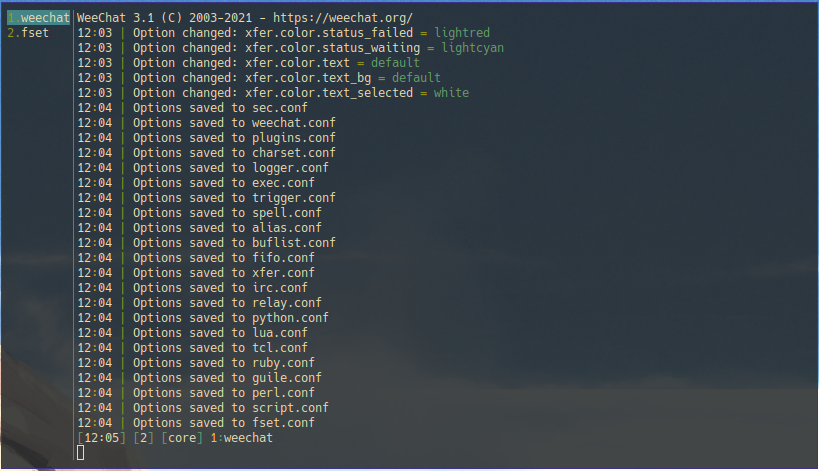 WeeChat has a rich scripting layer that you can read more about here. It has bindings for most languages you could care about. I have a few plugins that I use to make my WeeChat experience polished. I'm going to go over them in their own sub-sections. You can install scripts using the /script command.

<Mara> Newer versions of WeeChat require permission before they will be allowed to download scripts from the script repository. To give it permission, run this command:

Normally WeeChat will put buffers in the order that you opened them. I have a slight case of CDO, so I prefer having the buffers in the correct alphabetical order. autosort.py will do this. To install it, run this command:

It will kick in automatically when you create new buffers, however if you want to manually run it, use this command:

The autosort plugin has a lot of configuration, take a look at /help autosort if you want to dig deeper.

WeeChat doesn't remember what channels you were in when you close your client and restart it later. autojoin.py fixes this by saving the list of channels you are in when you quit WeeChat. It also gives you a command to save all of the channels regardless. To install it, run this command:

If you ever want to save your list of joined channels, run this command:

<Mara> The /save isn't strictly needed there, however it may help you feel better!

WeeChat normally stores its configuration as a bunch of text files in ~/.weechat. It doesn't version these files at all, which makes it slightly hard to undo changes. confversion.py puts these changes into a git repository. To install it, run this command:

It will automatically run every time you change settings. You don't need to care about it, however if you want to care about what it does, see the its settings with this command:

WeeChat is a terminal program. As such it is not the easiest to input emoji and sometimes you absolutely need to call something 💩. This script converts the emoji shortcodes you use on Discord, GitHub and Slack into emoji for you. To install it, run this command:

If you become a hyperlurker like I am, you tend to build up buffers. A lot of buffers. So many buffers that it gets hard to keep track of them all. go.py lets you search buffers by name and then go to them. To install it, run this command:

Then you should bind a key to call /go for you. I suggest meta-j:

<Mara> On some terminals, you can use the alt-key for this. On others you will need to press escape and then j. You can change this to control-j with something like /key bind ctrl-j /go.

One of the main ways to discover new channels to talk in on IRC is by using the /list command. By default this output gets spewed to the server buffer and isn't particularly useful. listbuffer.py collects all of the channels into a buffer and then sorts them by user count. To install it, run this command:

This will fire automatically when you do /list on an IRC server connection:

This one may not be super relevant if you don't run an IRC client in screen or tmux, but I do. This script will automatically mark you as "away" when you detach from screen/tmux and mark you as "back" when you attach again. To install it, run this command:

Connecting to an IRC Network

Now that things are set up, let's actually connect to an IRC network. For this example, we will connect to Libera Chat. In WeeChat's model, you need to create a server and then set things in it. However, let's set some default settings first.

<Mara> At this point it may be a good idea to start running WeeChat in tmux or a similar program. This will let you detach WeeChat and come back to it later.

Here's how you set the default nickname, username and "real name":

Add the Libera Chat connection with the /server command:

Then you can check the settings with /set irc.server.liberachat.*: 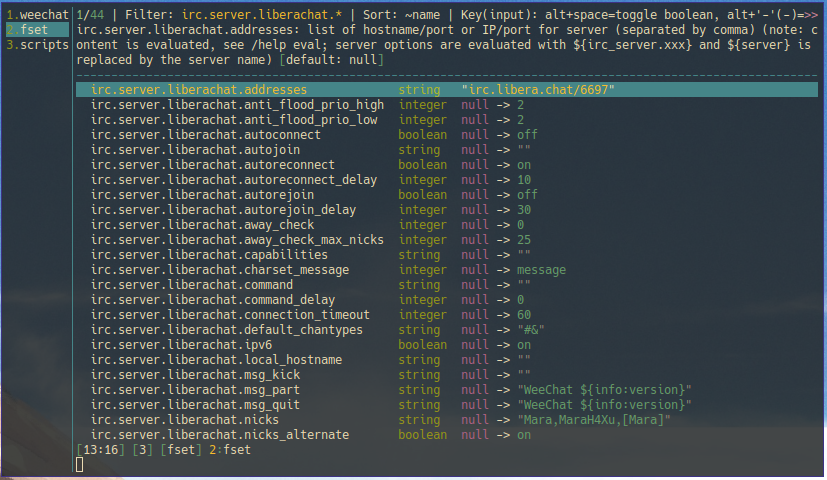 More than likely the defaults are fine, however you can customize them with /set if you want.

Next, let's connect to Libera Chat with this command:

Once you are connected, register an account with NickServ:

<Mara> IRC is a bit primitive, most networks use services like NickServ to help handle persistent identities on IRC.

Then set a password (make sure it's a good one!) and email address, then run the command. You will get an email from the Libera Chat services daemon with a verification command. Run it and then your account will be set up. For the rest of this article we are going to assume that your account name is [Mara].

Now you can configure WeeChat to automatically identify with NickServ on connection by using SASL. To configure SASL with WeeChat, do this:

<Mara> If you aren't using confversion.py, now is a good time to run /save.

Then run /reconnect and look for this line in your Libera Chat buffer:

If you see this, then you are successfully identifying with NickServ when you connect to Libera Chat.

IRC attaches your public IP or DNS hostname to every message you send. Some people may not want to have this happen. A cloak lets you hide your public IP address and put something else there instead. It allows you to show up as something like user/xe instead of chrysalis.cetacean.club.

To get a cloak, join #libera-cloak:

Then send !cloakme to the channel. The bot will kick you once your cloak is set.

From here you can join channels and talk around places like normal. Here are some of my main haunts on Libera Chat:

I am Xe on Libera Chat.

If you run WeeChat in tmux, you can attach to that tmux session later and then continue chatting wherever you end up. If you are on your phone or a tablet, this may not be the most useful thing in the world. It is somewhat difficult to use a shell on a phone. WeeChat has a relay protocol setting that lets you connect to your chats on the go. You can use Glowing Bear to work with WeeChat. The public instance at glowing-bear.org will work fine for many cases, but I prefer running it myself so I don't have to give my WeeChat instance access to a blessed TLS certificate pair.

To set this up, you will need to choose a relay password. I personally use type-4 UUIDs generated with uuidgen:

Then you can configure the relay port:

Now that you have the relay set up, you can check to see if it's working with netcat:

This should also trigger a message in WeeChat:

Now that you know WeeChat is listening, you can set up Glowing Bear with a NixOS module. Here's how I do it:

You can add this to your imports in your server's configuration.nix using the layout I described in this post. This would go in the host-specific configuration folder.

Once you've deployed this to a server, try to open the page in your browser: 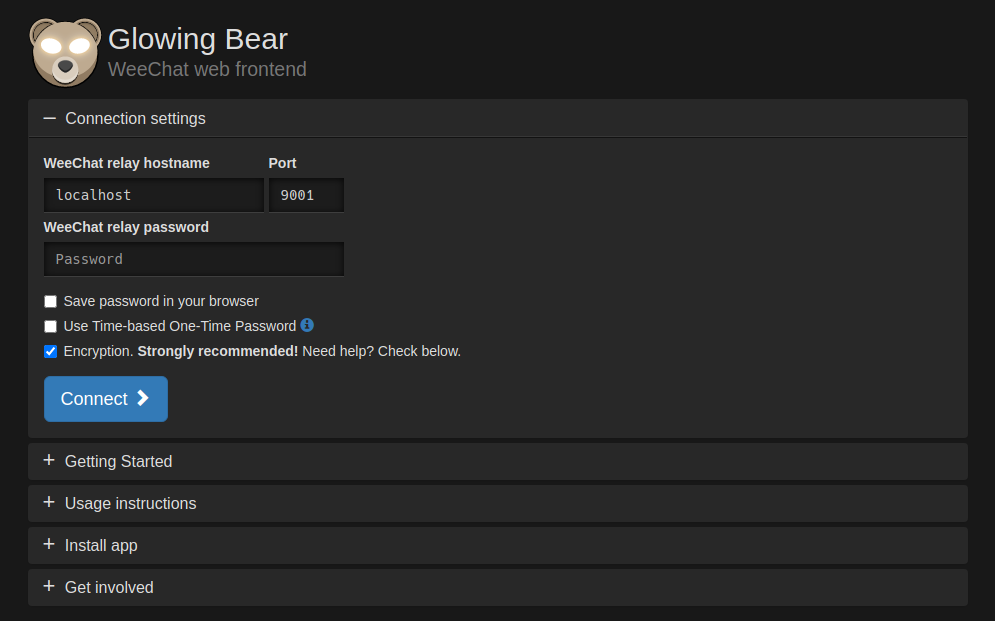 Then enter in the following details:

Then click "Save" and "Automatically connect" you will be connected to your chats!

IRC is a unique side of the internet. Here are some words of advice that may help you adjust to it:

Drop in #xeserv! There's a small but somewhat active community there. I would love to hear any feedback you have about my articles.

This article was posted on M05 29 2021. Facts and circumstances may have changed since publication Please contact me before jumping to conclusions if something seems wrong or unclear.