NOTE: There's gonna be spoilers here. Do not read if you are not okay with this. For a summary of the article without spoilers, this game is 10 out of 10 game of the year 2019 for me.

I have also been playing through this game on twitch and have streams archived here.

There's a long-standing rule of thumb to tell fiction apart from non-fiction. Fiction needs to make sense to the reader. Non-fiction does not. Death Stranding puts this paradigm on its head. It doesn't make sense out of the gate in the way most AAA games make sense.

In many AAA games it's very clear who the Big Bad is and who the John America is. John America defeats the Big Bad and spreads Freedom to the masses by force. In Death Stranding, you have no such preconceptions going into it. The first few hours are a chaotic mess of exposition without explanation. First there's a storm, then there's monsters, then there's a baby-powered locator, then you need to deliver stuff a-la fetch quests, then there's Monster energy drinks, and the main currency of this game is Facebook likes (that mean and do absolutely nothing).

In short, Death Stranding doesn't try to make sense. It leaves questions unanswered. And this is honestly so refreshing in a day and age where entire plot points and the like are spoiled in trailers before the game's release date is even announced. Questions like: what is going on? Why are there monsters? What is the point of the game? Why the hell are there Monster energy drinks in your private room and canteen? Death Stranding answers only some of these over the course of gameplay.

The core of the gameplay loop is delivering cargo from point a to point b across a ruined America after the apocalypse. The main character is an absolute unit of a lad, able to carry over 120 kilograms of cargo on his back. As more and more cargo stacks up you create these comically tall towers of luggage that make balancing very difficult. You can hold on for balance using both of the shoulder buttons. The game maps each shoulder button to an arm of the player character. There's also a stamina system, and while you are gripping the cargo your stamina regenerates much more slowly than if you weren't doing that.

This game handles scale very elegantly. The map is huge, even larger than Skyrim or Breath of the Wild. You are the UPS man who delivers packages, apocalypse be damned. This game gives you a lot of quiet downtime, which really lets you soak in the philosophical mindfuck that Kojima cooked up for us all. As you approach major cities, guitar and vocal music comes in and the other sound effects of the game quiet down. It overall creates a very sobering and solemn mood that I just can't get enough of. It seems like it wouldn't fit in a game where you use your own blood to defeat monsters and drink monster energy out of your canteen, but it totally does.

There is some mild product placement. Your canteen is full of Monster energy drink. Yes, that Monster. Making the player defecate shows you an ad for an AMC show. There's also monster energy drinks in your safe room that increase your max stamina for a bit. I'm not entirely sure if the product placement was chosen to be there for artistic reasons (it's surreal as all hell and helps to complement the confusing aspects of the game), but it's very non-intrusive and can be ignored with little risk.

This game also has online components. Every time you build a structure in areas linked to the chiral network, other players can use, interact with and upgrade them so they can do more things. Other players can also gives you likes, which again do nothing. Upgrading a zipline makes it able to handle a larger distance or updating a safe house lets you play music when people walk by it. It really helps to build the motif of rebuilding America. There is however room for people to troll others. Here's an example of this. There's a troll ladder to nowhere. There's a lot of those laying around mountains, so be on your guard.

Overall, Death Stranding is a fantastic game. It's hard. It's unforgiving. But the real thing that advances is the skill of the player. You make the deliveries. You go the distance. You do your job as the post-apocalyptic UPS man that America needs. 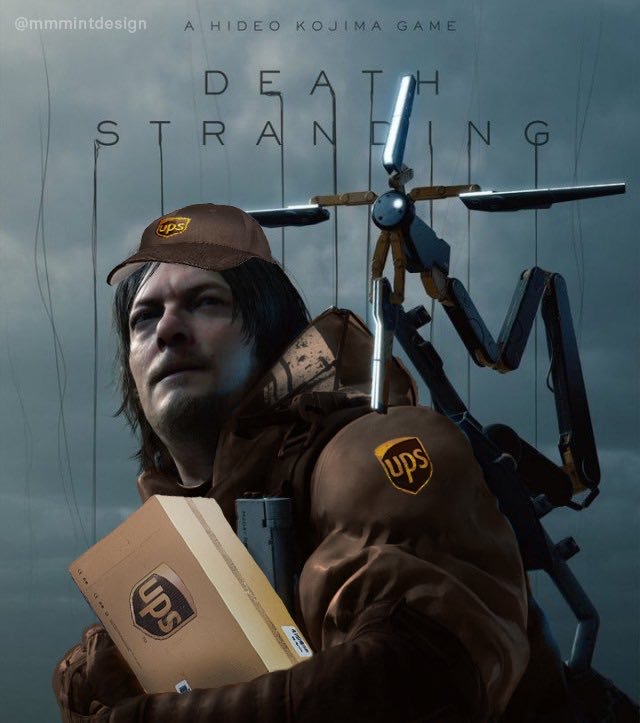 This article was posted on M11 11 2019. Facts and circumstances may have changed since publication Please contact me before jumping to conclusions if something seems wrong or unclear.