Right now PC gaming is largely a monopoly centered around Microsoft Windows. Many PC games only support Windows and a large fraction of them use technical means to prevent gamers on other platforms from playing those games. In 2021, Valve introduced the Steam Deck as an alternative to that monopoly. There's always been a small, underground market for handheld gaming PCs that let you play PC games on the go, but it's always been a very niche market dominated by a few big players that charge a lot of money relative to the game experience they deliver. The Steam Deck radically changed this equation and it's still on backorder to this day. This has made other manufacturers take notice and one of them was Anbernic.

Anbernic is a company that specializes in making retro emulation handheld gaming consoles. Recently they released their Win600 handheld. It has a Radeon Silver 3020e or a Radeon Silver 3050e and today I am going to give you my first impressions of it. I have the 3050e version.

<Mara> A review of the Steam Deck is coming up soon!

One of the real standout features of this device is that Anbernic has been working with Valve to allow people to run SteamOS on it! This makes us all one step closer to having a viable competitor to Windows for gaming. SteamOS is fantastic and has revolutionized gaming on Linux. It's good to see it coming to more devices.

Out of the box

I ordered my Win600 about 3 hours after sales opened. It arrived in a week and came in one of those china-spec packages made out of insulation. If you've ever ordered things from AliExpress you know what I'm talking about. It's just a solid mass of insulation.

The unboxing experience was pretty great. The console came with:

One of the weirder things about this device is the mouse/gamepad slider on the side. It changes the USB devices on the system and makes the gamepad either act like an xinput joypad or a mouse and keyboard. The mouse and keyboard controls are strange. Here are the controls I have discovered so far:

Figuring out these controls on the fly without any help from the manual meant that I had taken long enough in the setup screen that Cortana started to pipe up and guided me through the setup process. This was not fun. I had to connect an external keyboard to finish setup.

<Cadey> This is probably not Anbernic's fault. Windows is NOT made for smaller devices like this and oh god it shows.

There is also a keyboard button on the side. When you are using windows this button summons a soft keyboard. Not the nice to use modern soft keyboard though, the legacy terrible soft keyboard that Microsoft has had for forever and never really updated. Using it is grating, like rubbing sandpaper all over your hands. This made entering in my Wi-Fi password an adventure. It took my husband and I 15 minutes to get the device to connect to Wi-Fi. 15 minutes to connect to Wi-Fi.

Once it was connected to Wi-Fi, I tried to update the system to the latest version of windows. The settings update crashed. Windows Update's service also crashed. Windows Update also randomly got stuck trying to start the installation process for updates. Once updates worked and finished installing, I rebooted.

I tried to clean up the taskbar by disabling all of the random icons that product managers at Microsoft want you to see. The Cortana button was stuck on and I was unable to disable it. Trying to hide the Windows meet icon crashed explorer.exe. I don't know what part of this is Windows going out of its way to mess with me (I'm cursed) and what part of it is Windows really not being optimized for this hardware in any sense of the way.

Windows is really painful on this device. It's obvious that Windows was not made with this device in mind. There are buttons to hack around this (but not as far as the task manager button I've seen on other handhelds), but overall trying to use Windows with a game console is like trying to saw a log with a pencil sharpener. It's just the wrong tool for the job. Sure you can do it, but can and should are different words in English.

Another weird thing about Windows on this device is that the screen only reports a single display mode: 1280x720. It has no support for lower resolutions to run older games that only work on those lower resolutions. In most cases this will be not an issue, but if you want to lower the resolution of a game to squeeze more performance out then you may have issues.

In a moment of weakness, I decided to start up Steam. Steam defaulted to Big Picture mode and its first-time-user-experience made me set up Wi-Fi again. There was no way to bypass it. I got out my moonlander again and typed in my Wi-Fi password again, and then I downloaded Sonic Adventure 2 as a test for how games feel on it. Sonic Adventure 2 is a very lightweight game (you can play it for like 6.5 hours on a full charge of the Steam Deck) and I've played it to death over the years. I know how the game should feel.

City Escape ran at a perfect 60 FPS at the device's native resolution. The main thing I noticed though was the position of the analog sticks. Based on the design of the device, I'm pretty sure they were going for something with a PlayStation DualShock 4 layout with the action buttons on the top and the sticks on the bottom. The sticks are too far down on the device. Playing Sonic Adventure 2 was kind of painful.

So I installed SteamOS on the device. Besides a weird issue with 5 GHZ Wi-Fi not working and updates requiring me to reboot the device IMMEDIATELY after connecting to Wi-Fi, it works great. I can install games and they run. The DPI for SteamOS is quite wrong though. All the UI elements are painfully small. For comparison, I put my Steam Deck on the same screen as I had on the Win600. The Steam Deck is on top and the Win600 is on the bottom.

Yeah. It leaves things to be desired.

When I had SteamOS set up, I did find something that makes the Win600 slightly better than the Steam Deck. When you are adding games to Steam with Emulation Station you need to close the Steam client to edit the leveldb files that Steam uses to track what games you can launch. On the Steam Deck, the Steam client also enables the built-in controllers to act as a keyboard and mouse. This means that you need to poke around and pray with the touchscreen to get EmuDeck games up and running. The mouse/controller switch on the Win600 makes this slightly more convenient because the controllers can always poorly act as a mouse and keyboard.

When you are in KDE on the Win600, you don't get a soft keyboard at all. This is mildly inconvenient, but can be fixed with the moonlander yet again. Here's a screenshot of what my KDE desktop on the Win600 looks like: 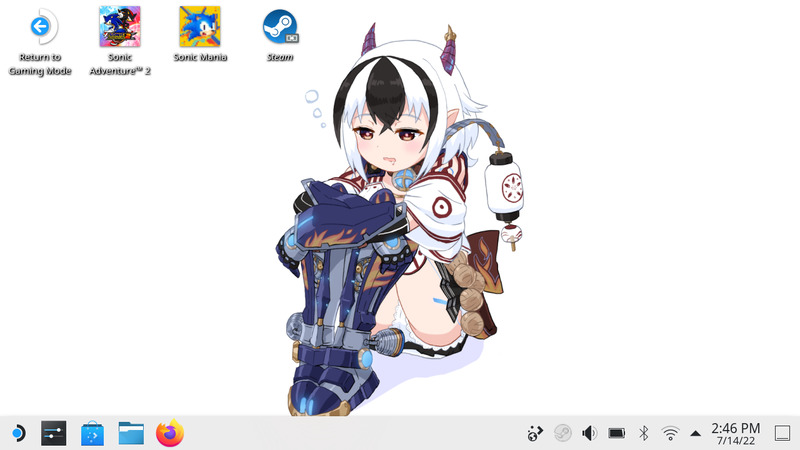 Overall, SteamOS is a lot more ergonomic in my opinion and will let you play games to your heart's content.

The D-pad feels really good. I love how it responds. When I did a little bit of Sonic Mania I never felt like I was inaccurate. There were some weird audio hitches on Sonic Mania though where the music would cut out randomly. Not sure what's going on with that. I could play through entire Pokemon games with that D-pad.

Overall I'm getting the feeling that this device is okay. It's not great, it's not terrible, but it's okay. I need to get some more experience with it, but so far it seems that this device really does have a weight class and oh god if you play a game outside its weight class your UX goes to shit instantly. The battery life leaves a lot to be desired so far. However it does work. It's hard to not compare this to the Steam Deck, but it's so much less in comparison to the Steam Deck.

I don't know how I feel about this device. I'm not sure it's worth the money. I need to get more experience with it. I'll have a better sense of all this when I write my full review. Stay tuned for that!

This article was posted on M07 14 2022. Facts and circumstances may have changed since publication. Please contact me before jumping to conclusions if something seems wrong or unclear.